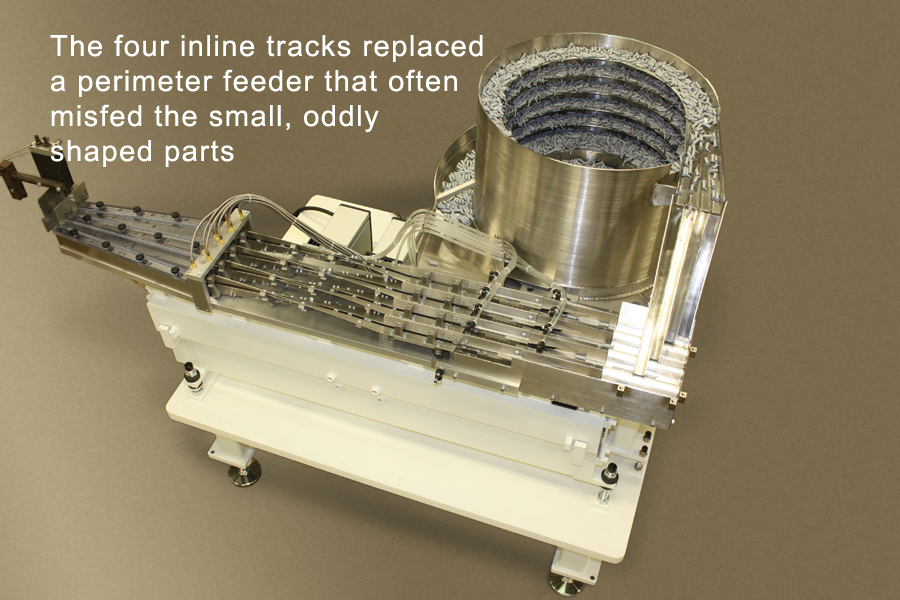 Problem: An OEM of dental cleaning products was having a problem loading their automated assembly machinery with the small tips for dental water picks. The parts were required to be fed to an assembly robot with the spray points down and trailing. Their system was failing to hand off the parts correctly and critical tooling was needed to correct the problem. They turned to Fortville Feeders to solve this problem.

Solution: This feeder system required four parts be fed to a robotic head at a rate of 80 ppm. Fortville engineers studied the old system, which picked up parts around the perimeter of a feeder bowl, and found it was not always accurate in the positioning of the parts. The geometry of the parts made it difficult to feed. They were small and the tip had a tendency to misalign in the pickup process. However, Fortville’s engineers had dealt with small and challenging-shaped parts in the past. They suggested a solution which put the burden of orienting and selecting on four straight inline tracks. The first section of track channeled the parts into a flat position before lifting them to an upright orientation. The track then tripped the tips to a trailing orientation before storing them in the final approach to the robot. This provided the tight tolerances needed to orient and position all four parts in the precise manner the robot required. The new system allowed the parts to hold their position as they moved toward the end of the line at a high speed. Fortville is just as comfortable tooling in the track as they are on the bowl, so they could offer the customer an unbiased option to solve their feeding problem.

Since these were dental parts which were assembled and packaged in a sterile environment, keeping them from human touch was important to the process. Everything from loading the feeder bowl to returning misaligned parts to the feeder bowl was specific to this task. Fortville manufactured the system with a lexan lid over the lines to protect from any airborne contaminates. The stainless steel used on the system was specific to the medical/sterile nature of the parts handling procedures. The feeder bowl was required to contain 5,000 parts which could be loaded quickly with minimal human manipulation. Fortville provided a deep vibratory feeder bowl to handle this large number of parts.

This system was engineered and manufactured with the customer’s objectives in mind. The system handled thousands of tiny parts, delivering them to the robotic assembly unit accurately, with an eye to high-speed repeatability without stopping for misaligned and misfed parts. 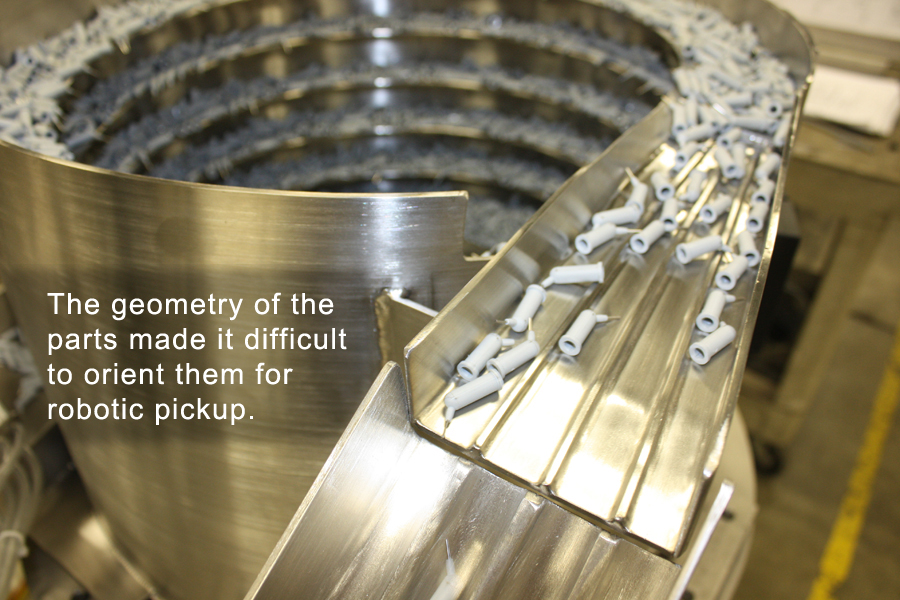 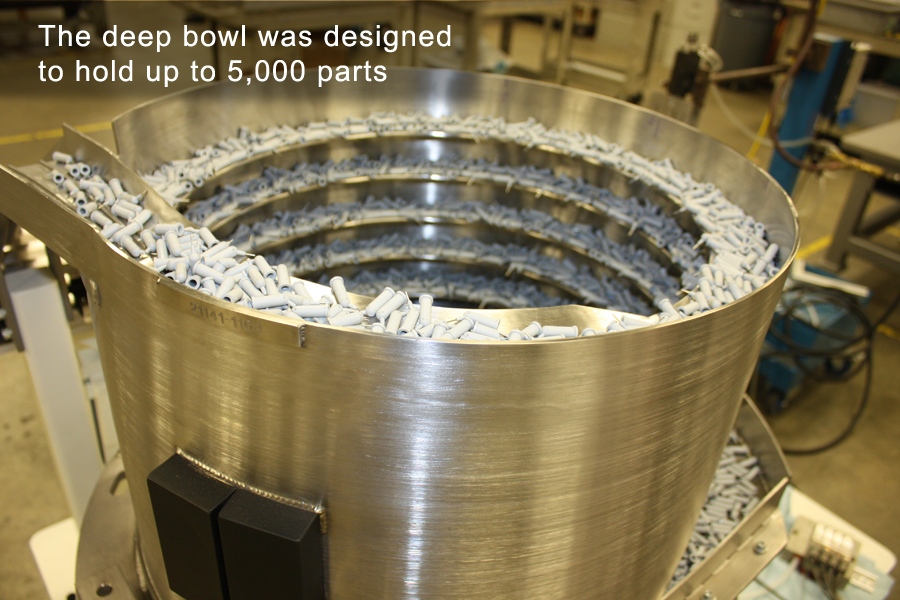 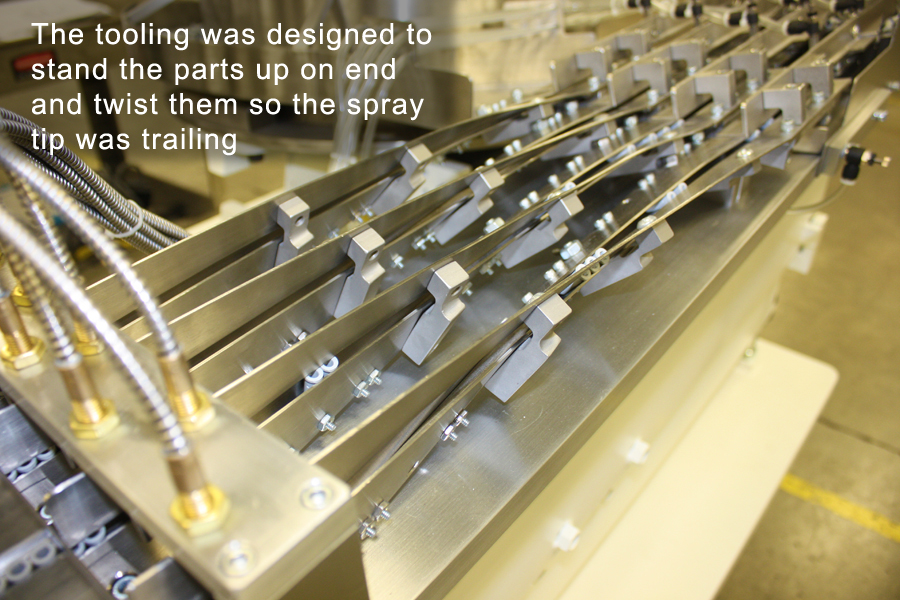 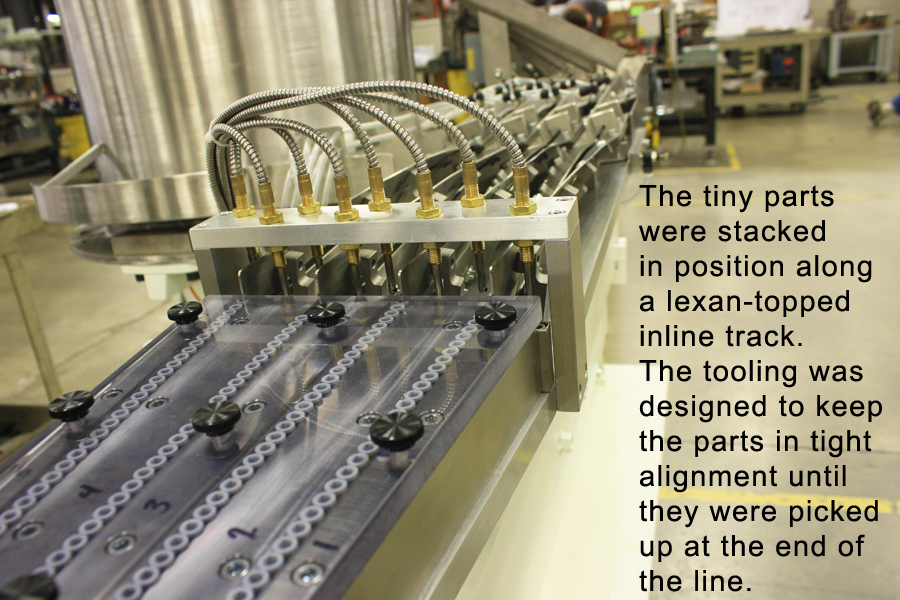