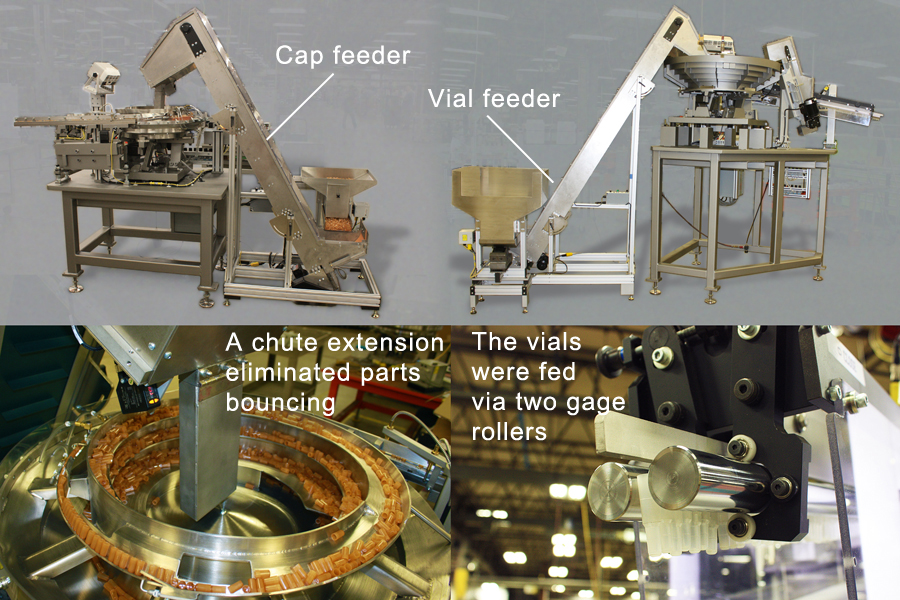 Problem: An integrator was building an assembly and labeling automation system for a medical packaging company. The high-speed system labeled vials and capped them before being filled. The customer needed two feeder systems; one for the vials and one for the caps, that would move the parts at 260 ppm, eliminate non-compliant parts and orient them for precision assembly. The vials and caps were made of lightweight plastic. Feeding light parts at a high speed can be a problem when exact handoff is needed at the end of the line. A stray puff of air can misorient parts and cause misfeeds.

Solution: Many times, assembly automation requires the coordination of multiple feed systems. Many feed system manufacturers will try to use the same type of movement for all the parts. Although that could work, in this case Fortville Feeders’ engineers thought the two systems would work best with two different types of delivery systems.

The cap feeder was designed with a vibratory bowl and track. The caps were symmetrical and had little distinguishing features other than the opening at one end of the cap. The key to proper orientation was a series of tooling and compressed air selectors. Fortville Feeders designed the tooling in the bowl with two orientation and three selection sections to ensure that the caps were moved to the end of line with the open end up.

Another innovative feature used on the moving of bulk parts to the feeder bowl was a chute extension that eliminated bouncing parts. Many times light weight parts have a tendency to rebound when dropped from an elevator. The chute extension kept parts contained until they rested on the base of the bowl.

The other piece of this design was a vial feeder. The engineers at Fortville Feeders sought out a non-traditional approach to moving the vials. They utilized a through-feed gage roll design to both move the parts quickly and eliminate non-compliant parts. Although fast, most gage rolls are not capable of feeding directly into an indexing dial plate because of an end carrier bearing. Fortville used opened-end gage rolls that placed the parts precisely into the dial plates.

The vials were tapered, so the gage rolls were spaced to let the parts hang between them. By hanging the parts, they were properly oriented with open ends up, and could be moved at a high speed without repositioning them due to air friction. Large and small parts were moved off the rollers and sent down a rejection chute. Misoriented parts were sent back up an elevator and returned to the bowl.

These two feeder systems were both programmed to run at 260 ppm to meet the assembly specifications. 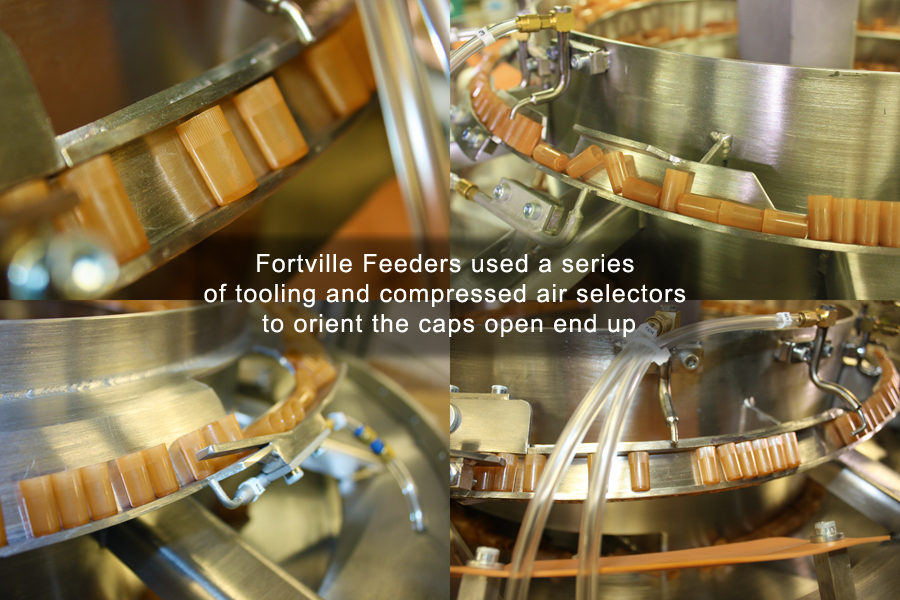 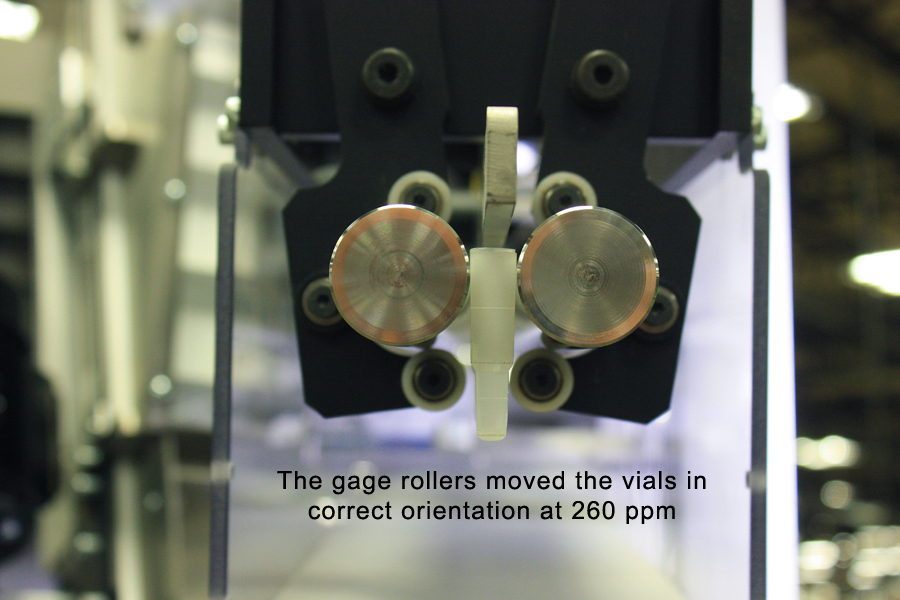 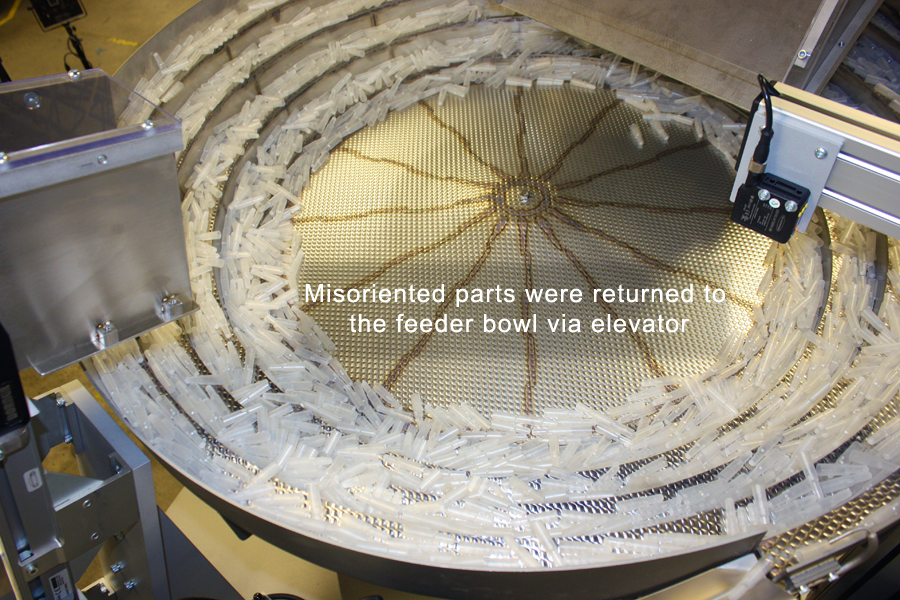 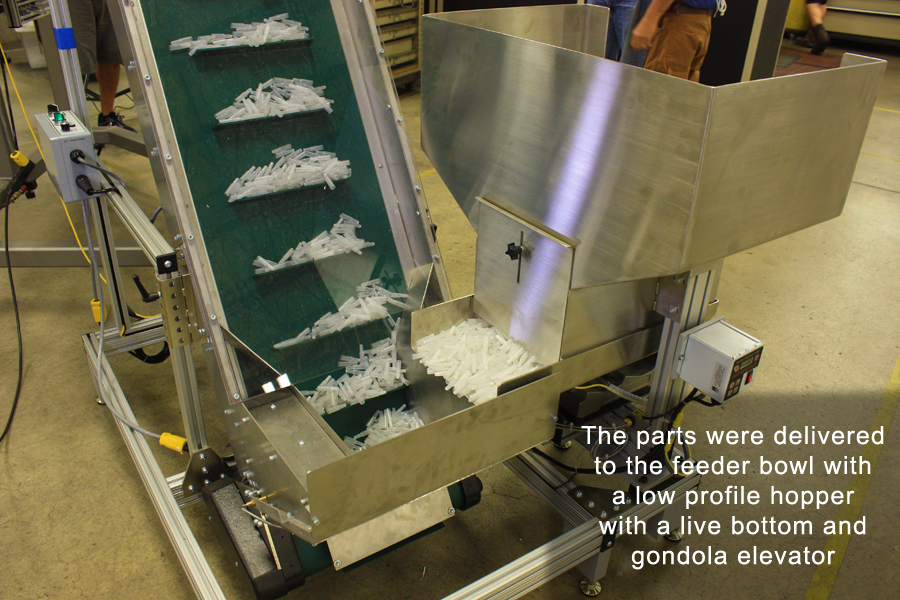