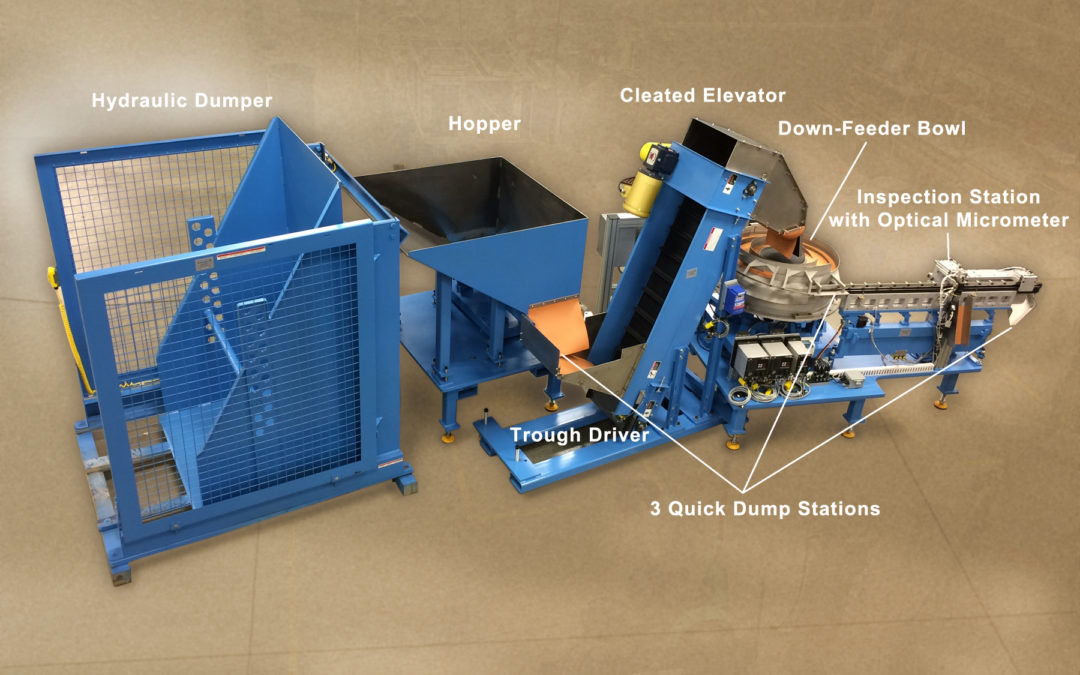 The customer needed a way to feed large bolts of varying lengths to its heavy duty wheel hub assembly cell. They manufacture eight different axle assemblies, each with a different size wheel bolt. They needed a feeder system that could handle all eight different parts in one unit, but could also be changed over in short order. They also wanted a system that would check each part for size discrepancies and automatically eliminate nonconforming parts before they were sent down line.

Five large components were needed to work in concert in this vibratory feeder bowl system. Fortville Feeders engineered a feeder system that could be loaded and changed over quickly with one line operator. The system utilized a hydraulic lift dump station with an oversized hopper to load the bolts from bulk packaging. The hopper was specified to hold 1-1/2 pallet loads of bolts. Parts were then dumped into a trough driver with a cleated elevator and fed into a down-feeder bowl. Parts were oriented and sent down an inline track.

One concern had to do with the machine setup and changeover time. Converting this feeder bowl system from one part to the next in short order was a bit of a challenge. The bolts were long and heavy. With a large capacity hopper and 14 feet of machinery, the system supported hundreds of bolts that needed to be removed when it was time for the changeover. Fortville engineers solved this issue by designing three quick-dump stations on the feeder system: one on the hopper, one on the feeder bowl, and one on the end of the track. The operator could change out parts and set the optical micrometer for another bolt’s length in a matter of minutes.

Another concern with a system that handles eight different sized bolts is that a stray part would get mixed into the load. With such a large hopper, one nonconforming part would be nearly impossible to find with the human eye, but would cause major problems if it were sent down the line to the axle assembly station. The eight different bolts only vary in length by as little as 0.10 inch. Fortville resolved this by building an inspection station with an optical micrometer in between two inline tracks. The first inline fed the parts into an inspection station, measured them, and ejected nonconforming parts down a chute. The good bolts moved on to a second inline which fed the assembly station. The system was able to provide 100% inspection, nonconforming part isolation, and maintain a rate of 30 parts per minute without any operator involvement.

The efficiency of this feeder bowl system allowed the manufacturer to keep their lines running at peak performance and cut down time for each setup. 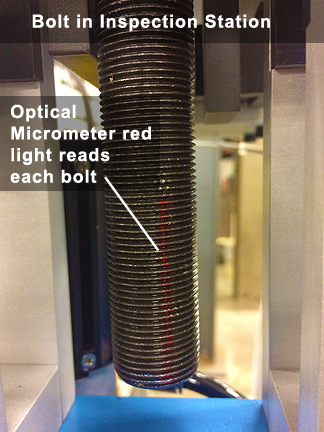 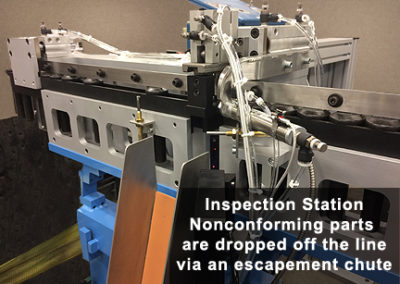