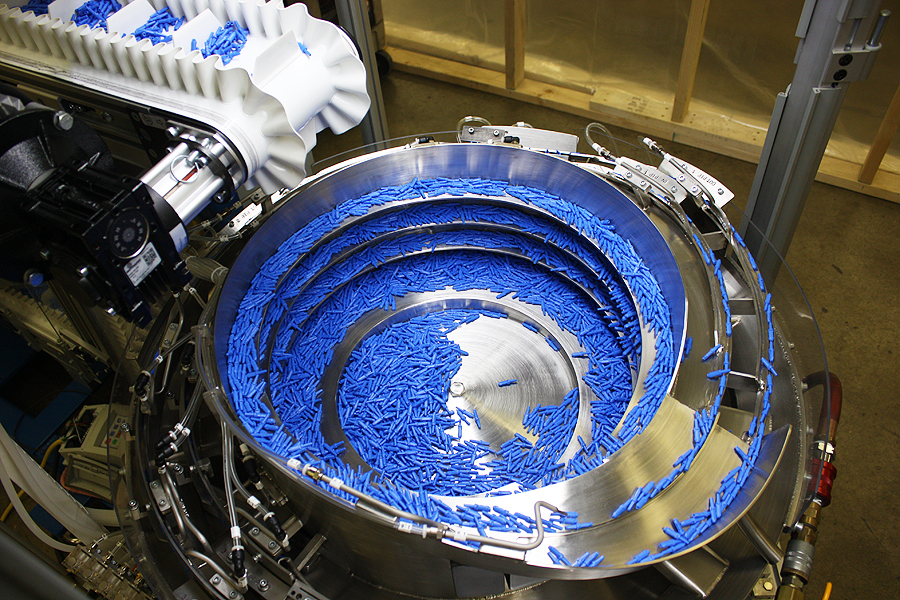 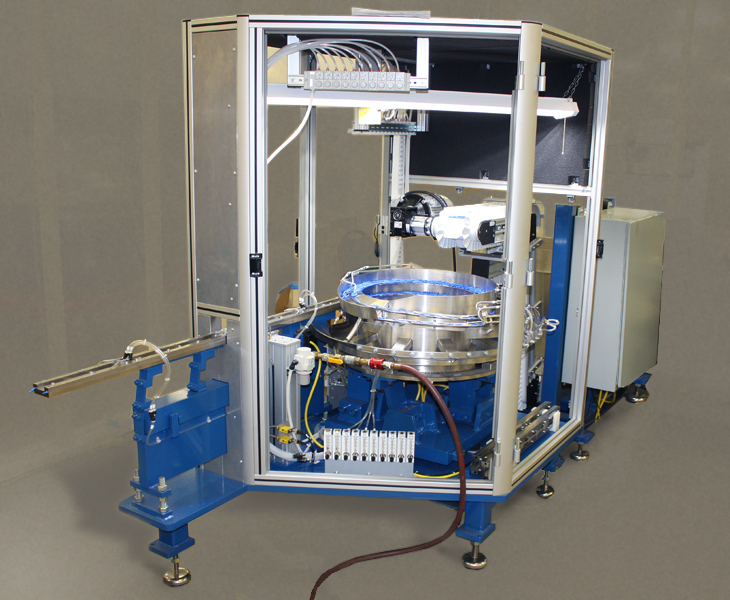 Problem: A manufacturer of ear protection devices needed two small parts – stems for earplugs – fed to their assembly equipment at a high rate of speed. The plastic stems had to be oriented properly, with the smaller diameter end leading. Any damaged or irregular parts needed to be removed from the system automatically. This had been a problem with their previous system, leading to down-the-line jams and non-compliant products.

There were three big challenges in feeding these parts. First, these were very small parts with few differences in the geometry from one end of the part to the other. It was critical that each part be oriented correctly. Second, they needed to be fed at a rate of 200 ppm to match the speed of their assembly equipment. Third, the customer wanted to run two different parts on the same feeding system. They needed quick changeover capabilities for the second part.

Solution: Fortville Feeders engineers worked with the customer to come up with a solution that handled the parts as specified. Fortville built critical tooling that oriented the parts and fed them down two air-driven tracks. The speed of delivery requirement was satisfied with two components: A fast-feed elevator with a sensor over the bowl that kept bulk parts flowing into the system, and an air-driven track that moved the parts quickly. However, with such lightweight parts moving at a high speed, there was a concern that they would be blown and misaligned in the track. Fortville engineered a dual-line air track to contain the parts and move them to the next operation. The air pressure across the entire system was controlled by a series of pneumatic air regulators. Fortville had built numerous feeding systems that used the same technology with lightweight parts.

The system was designed to expedite changeover from one part to the other. A fully loaded bowl could be emptied and ready for the new parts in less than three minutes. Each part had to have separate air pressure and flow settings, as well as different selectors and dedicated tracks. The mechanical components were all marked and were not adjustable. The pneumatic changeover was accomplished by a bank of regulators dedicated to each part set up. This used solenoid valves controlled by the customer’s PLC, thus eliminating any adjustments from part to part.

The system was put through rigorous in-house testing. The customer then sent a team of their employees to Fortville to inspect the system, run it and perform a changeover before it was shipped out. Fortville was able to deliver a feeding system that met all three of the big challenges to the satisfaction of the customer’s inspection team. 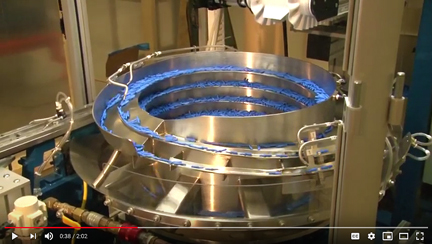 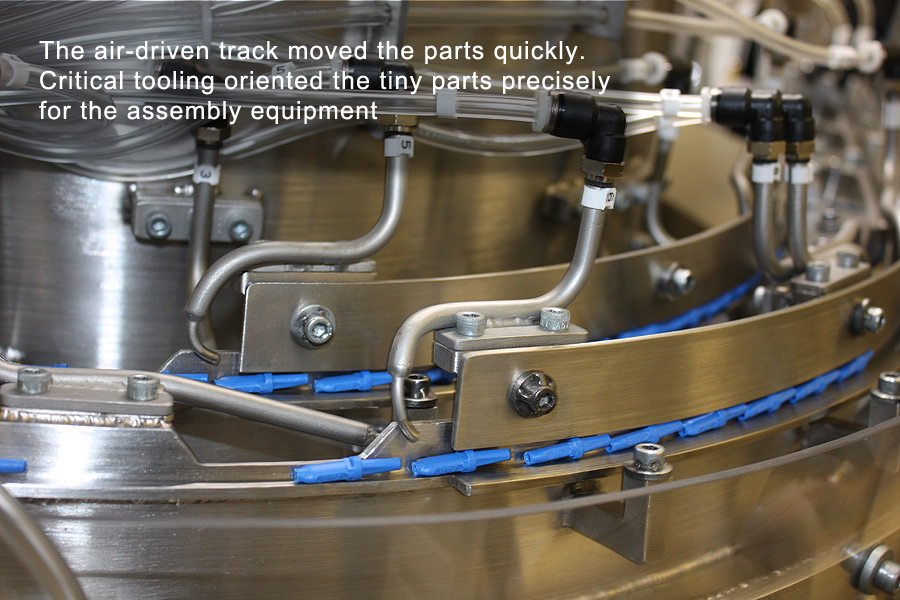 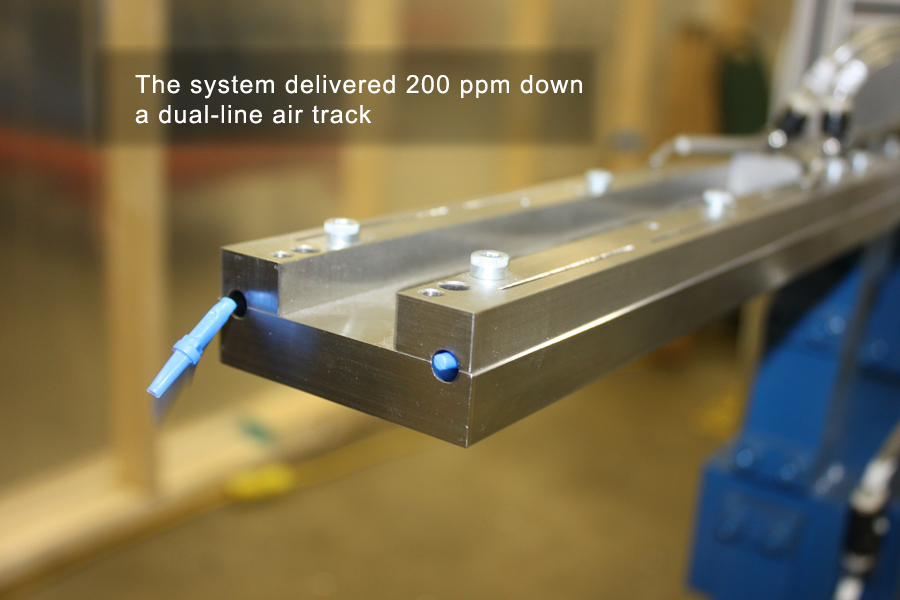 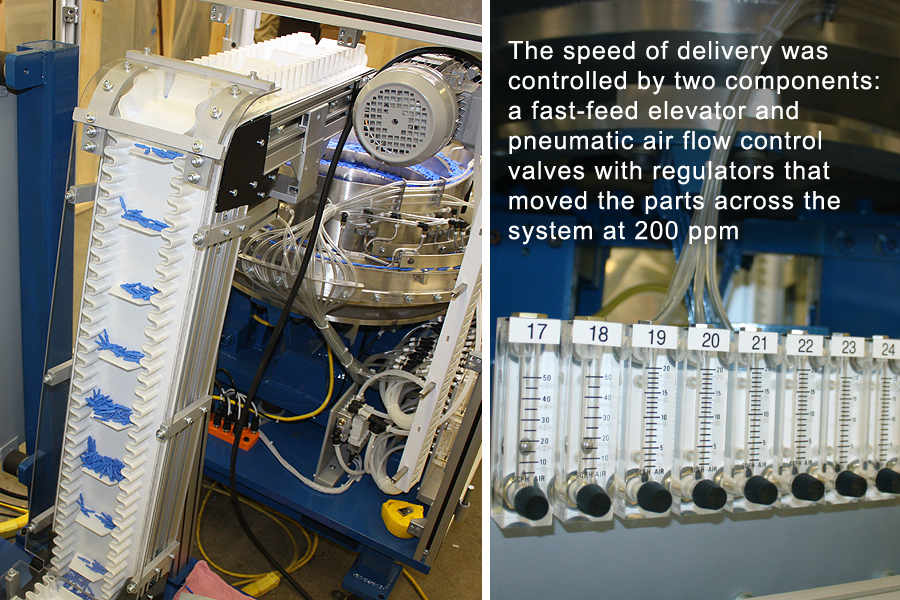 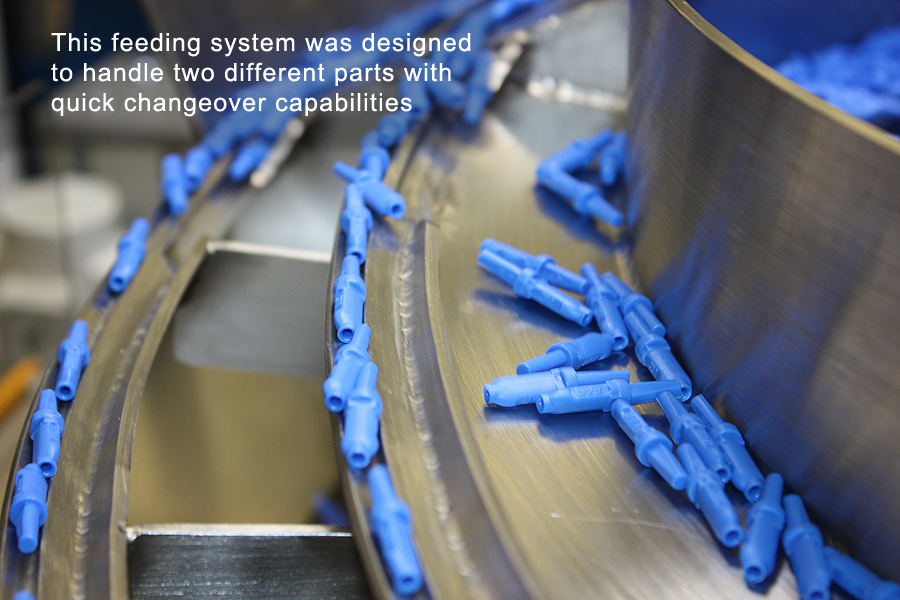