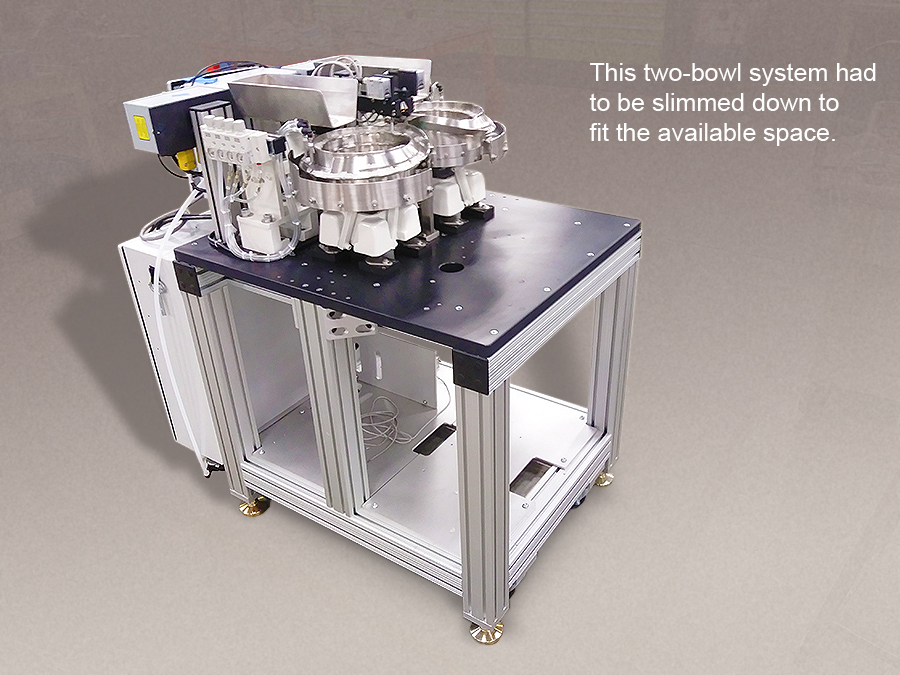 Problem: An integrator was building an assembly system that handled 64 different flat rubber seals. There were very tight quarters for the machinery, especially the feeder system. The space was so tight that the standard-sized feeder equipment would have to be sized down, but still had to accommodate all 64 parts and two lines for robotic pickup. The system also had to comply with FDA regulations for parts handling equipment.

Solution: There were three things to consider in designing and building this feeder system. Operationally, it had to handle all 64 different parts and hand them off to robots at the end of two lines. Parts were presented in a right-handed and left-handed orientation. This required two feeder bowls with accompanying vibratory hoppers. Second, the limited space meant that standard equipment could not be used. Third, this was an FDA-regulated feeder system that required 316L stainless steel construction with polished welds and a no-touch system from loading to handoff.

Fortville Feeders came up with an engineered solution for this tight-fitting feeder system. Space was so limited that the outside diameter of the bowls had to be reconfigured. All the tooling for parts orientation took place in the bowl. Parts were then fed to a machined discharge station between the two bowls. The hoppers were customized to fit the space. All welding and machining services were done within Fortville’s manufacturing facility. This helps keep specialized jobs from bogging down the production schedule while waiting for outside services to be completed. This included the MIC 6 aluminum table, which was milled in-house on one of Fortville’s CNC machines.

The raw materials were FDA approved, but there is much more to an FDA system than just building with the right materials. Ensuring there are no jams or misfed parts is critical in a no-touch system where eliminating human touch contamination is a concern. The system was built with two double-safe parts sensor systems that first sensed if parts were correctly oriented in the ready position before moving them to the final nest, where they were scanned again for their presence before the robot was alerted to pick them up. Any misoriented or non-compliant parts were moved off the line with compressed air and a new part was moved in to take its place. When parts were ready for pickup, the vibratory feeder bowls were turned off so there would be no movement when the robots picked each part. Parts were moved and checked at 5-second intervals.

Fortville Feeders was able to deliver a two-bowl parts feeding system that handled all the parts required by the customer, fit the tight space it was allotted and met all the FDA requirements for sterile supply. 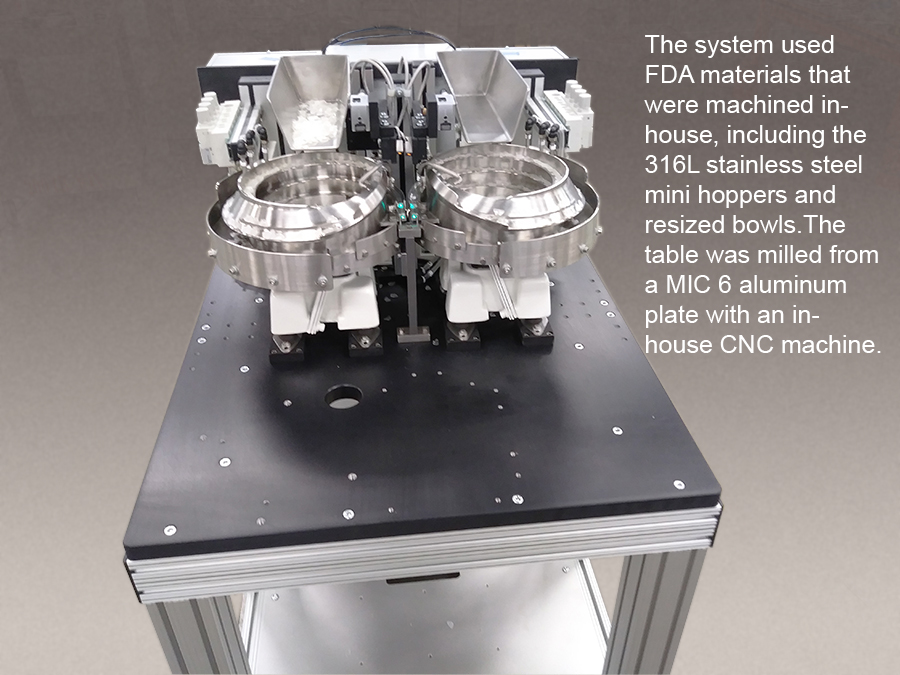 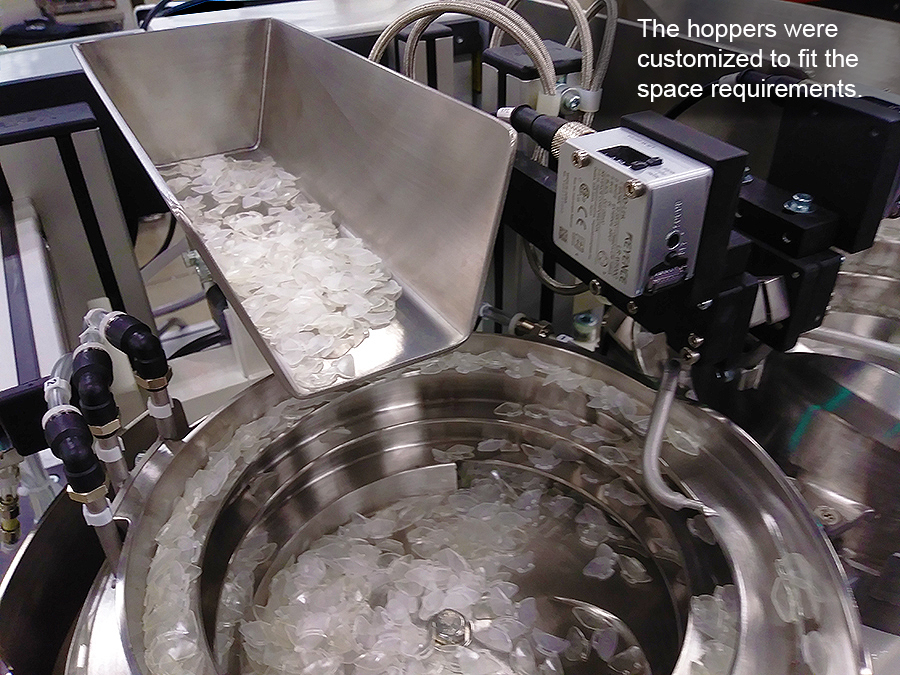 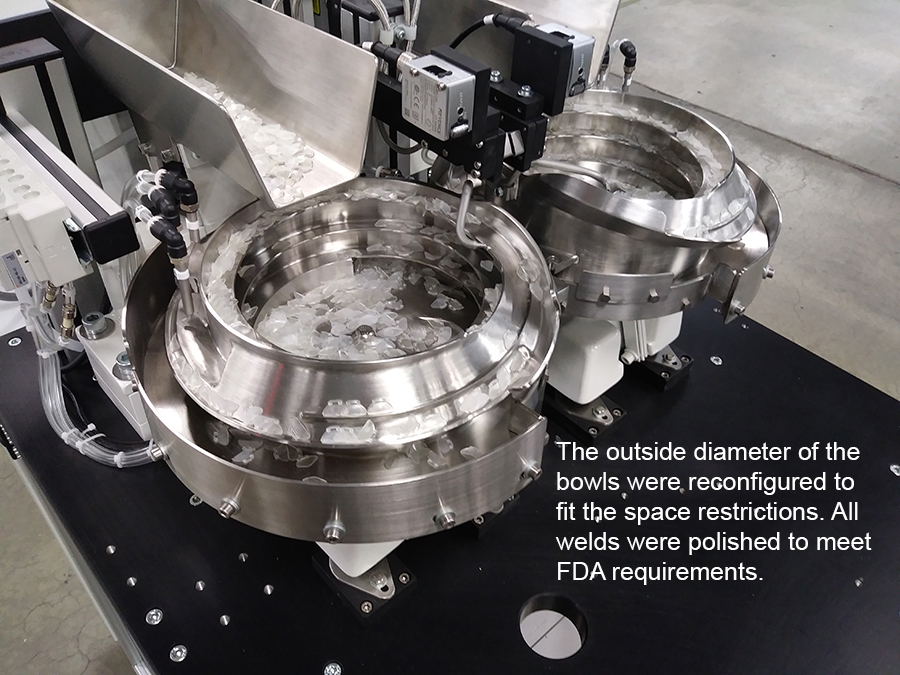 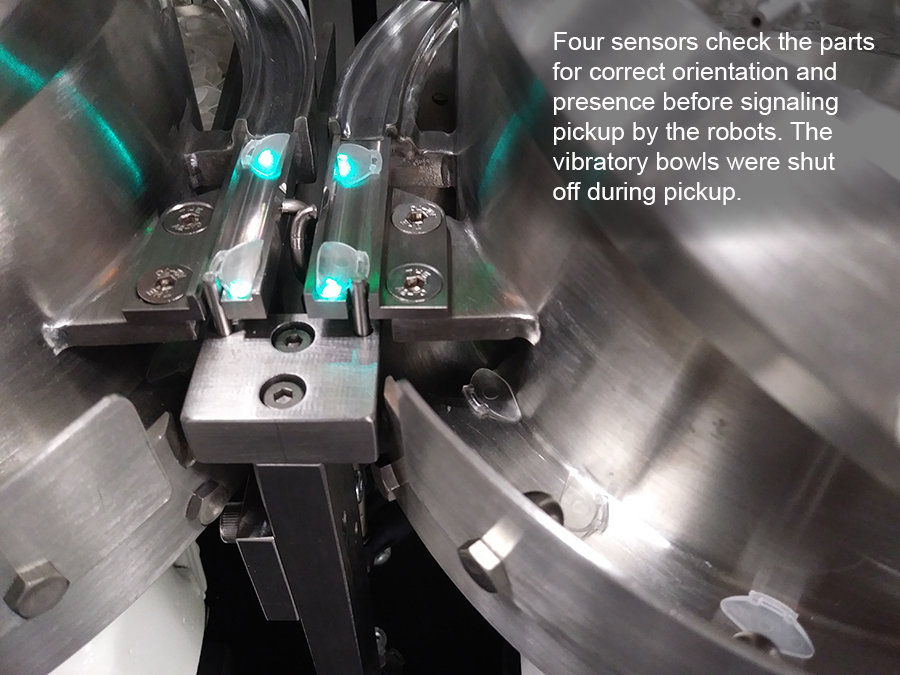 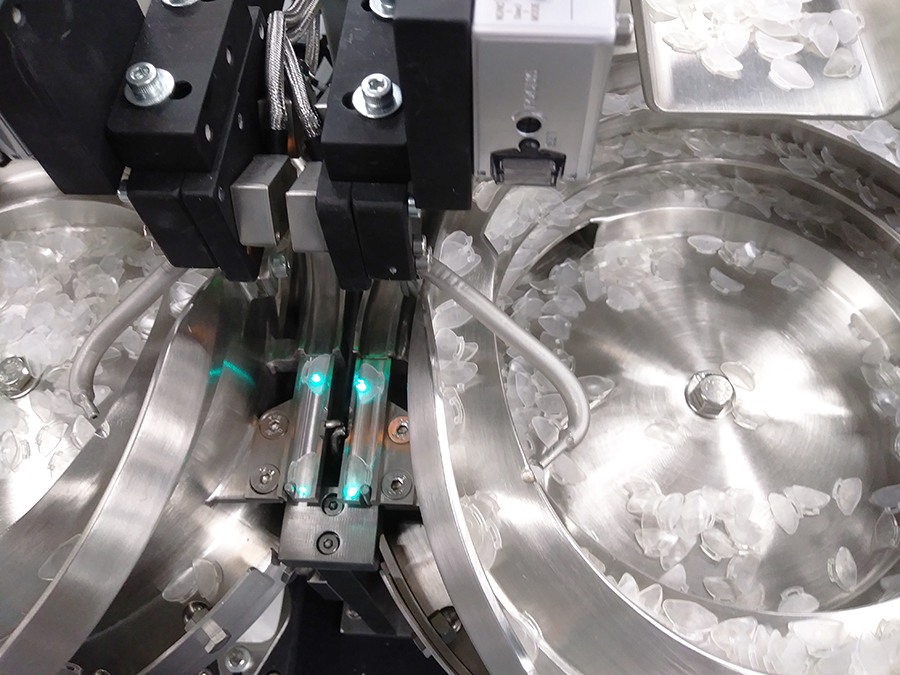